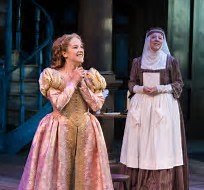 Photo: Viola and her Nurse (Betsy Mugavero and Leslie Brott) from Shakespeare in Love

These are the three plays we saw this year at the Utah Shakespeare Festival–next year, we hope to see five! Two winners and a shockingly big loser; never disappointed in a play at this festival before now, and we’ve attended for years! But my hopes are high for the future of excellent plays at this professional theatre.