As we leave Easter behind and approach Mother’s Day, I have been thinking about and missing my mother. She died when I was 30 and she was 53, of lupus. This has been a difficult 2019 in many ways, and I have thought of her often and wished I could talk to her. Being a mother seems more of a privilege and also more difficult than it usually does, because my adult daughter was injured and has needed my help and care; in addition, a friend has needed my service and attention. I know that if my mother were here, she would help me take care of my daughter, or be my cheerleader in doing all that needs to be done, as she always was. I also know that she is aware of me as she makes progress beyond the veil of death, but I would give much to be able to talk to her on the phone for a couple of hours, as we used to do, back in the days when you had to wait for the long-distance rates to go down before calling. I am thankful to our Savior Jesus Christ that we never leave Easter behind, because the resurrection and the promises of redemption are always with us. I wrote the following poem some time after I spent a month in the hospital with my mother as she died, in 1985. She was a wonderful mother; I will always miss her until I can be with her again in the next life.

I have not lost you; I know where you are.
Gowned in silk and steel gray,
patchworks of grass and flowers,
frost and mud. I can visit you.

Every three hours for 15 minutes,
I can visit you. Monitor green lines and tubes.
Behind your mask, the gasping, gracious hostess,
you welcome all who come to smile to you and cry to me.
You cry to me, squeeze my hand,
Hello, Don’t leave, Keep singing.
I exhaust my repertoire: I can’t stand here anymore tonight.
You wait for morning.

I wait for mourning; it won’t be long now;
Your only consciousness is breathing,
only breathing, only trying to breathe.
Numbers fall; green lines slowly tumble flat:
flat as nothing, flat as gone.
And all the crying before was only practice.

Still, I have not lost you; I know where you are.
After you drowned in yourself, you woke,
took one deep, sweet, easy breath
and looked upward. 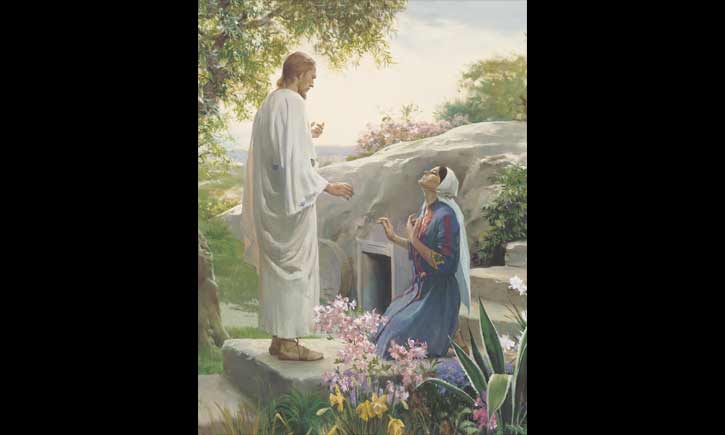 Today is Easter Sunday, when we celebrate the resurrection of Jesus Christ and remember His Atonement, carried out in the Garden of Gethsemane and on the Cross. But there is another important event that took place on that Easter weekend in the meridian of time.

When the resurrected Savior met Mary Magdalene in the garden near His empty tomb, He told her, “Touch me not; for I am not yet ascended to my Father: but go unto the brethren and say unto them, I ascend unto my Father, and your Father; and to my God, and your God” (John 20:17). Why had He not yet ascended to the Father? Why did He wait until Sunday morning to claim His resurrection? Where had He been while His body lay in the tomb?

According to Elder Bruce R. McConkie, after Jesus proclaimed His work finished and voluntarily died on the cross, “He was as other men in that his spirit went to live in a spirit world to await the day of his resurrection … . When Jesus died—that very moment—his mortal ministry ended and his ministry among the spirits in prison began” (Bruce R. McConkie, The Mortal Messiah: From Bethlehem to Calvary, Book 4, Salt Lake City, UT: Deseret Book, 1981, 240–41).

As part of His mission here on earth, our Redeemer experienced all the things that human beings experience. In this way, He is able to comfort us and understand all our experiences (see Hebrews 4:14–16). Perhaps as part of understanding human experience, Jesus experienced death as we do, going from mortality to the world of spirits (1 Peter 3:18–20; 4:6; Alma 40:12). This visit had been prophesied by Isaiah (see Isaiah 24:22; 42:7; 61:1).

As the prophet Joseph F. Smith recorded in his “Vision of the Redemption of the Dead” (Doctrine & Covenants 138), the righteous among the “hosts of the dead” were eagerly awaiting this event, when the Lord would come to them and His anticipated resurrection would free them to take up their own glorified bodies, the separation from which they considered to be “bondage” (Doctrine & Covenants 138:50; see 138:11–16). The great moment came, and Jesus Christ came to the righteous spirits and “preached to them the everlasting gospel, the doctrine of the resurrection and the redemption of mankind from the fall, and from individual sins on conditions of repentance” (Doctrine & Covenants 138:19). Then He organized missionary work in the world of spirits, so the righteous could take to their brothers and sisters who were in darkness the gospel of Jesus Christ,

31 … to declare the acceptable day of the Lord and proclaim liberty to the captives who were bound, even unto all who would repent of their sins and receive the gospel.

32 Thus was the gospel preached to those who had died in their sins, without a knowledge of the truth, or in transgression, having rejected the prophets.

33 These were taught faith in God, repentance from sin, vicarious baptism for the remission of sins, the gift of the Holy Ghost by the laying on of hands,

34 And all other principles of the gospel that were necessary for them to know in order to qualify themselves that they might be judged according to men in the flesh, but live according to God in the spirit.

35 And so it was made known among the dead, both small and great, the unrighteous as well as the faithful, that redemption had been wrought through the sacrifice of the Son of God upon the cross.

At last the hour was come, and Jesus took up His perfected, glorified body on that Sunday morning at dawn:

Beginning in the spiritual anguish of the Garden of Gethsemane, moving to the Crucifixion on a cross at Calvary, and concluding on a beautiful Sunday morning inside a donated tomb, a sinless, pure, and holy man, the very Son of God Himself, did what no other deceased person had ever done nor ever could do. Under His own power, He rose from death, never to have His body separated from His spirit again. Of His own volition, He shed the burial linen with which He had been bound, carefully putting the burial napkin that had been placed over His face “in a place by itself,” the scripture says.

That first Easter sequence of Atonement and Resurrection constitutes the most consequential moment, the most generous gift, the most excruciating pain, and the most majestic manifestation of pure love ever to be demonstrated in the history of this world. Jesus Christ, the Only Begotten Son of God, suffered, died, and rose from death in order that He could … grasp us as we fall, hold us with His might, and through our obedience to His commandments, lift us to eternal life.

How great, how glorious, how complete
Redemption’s grand design,
Where justice, love, and mercy meet
In harmony divine! 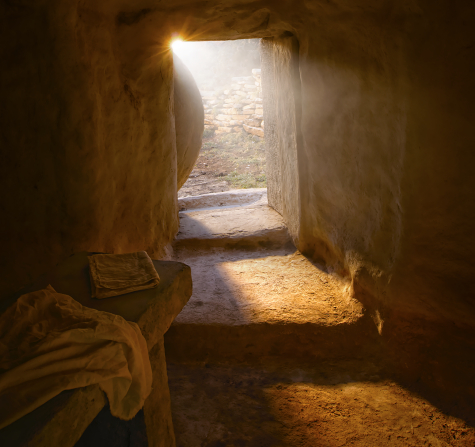 Jeffrey R. Holland, “Where Justice, Love, and Mercy Meet,” Ensign, May 2015. After Christ’s resurrection, the spirits of others who had died (and had been present during His visit to the spirit world) “rose and appeared unto many” (Matthew 27:52–53; 3 Nephi 23:8-13). The stone of death had been rolled away, and the work of the Lord entered into a new light from that time forward. Only then, when all the elements of His mortal ministry were complete, did Jesus take up his perfected and glorified body, appear to Mary Magdalene, and then ascend to His Father for the reunion that They both, undoubtedly, had anticipated and longed to experience. Even after that, Jesus did not remain in glory with the Father, but returned to his disciples in Palestine to teach and bless them (Matthew 28:9–10; Mark 16:12–14; Luke 24:13–49; John 20:19–29; 21:1–25; Acts 1:2–9). And then He went to His “other sheep” in the Americas and elsewhere (3 Nephi 11–26). 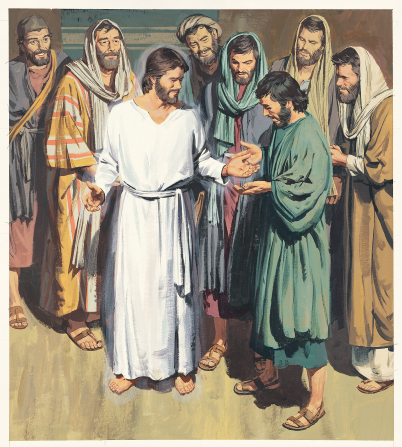 As we remember the heartbreaking, yet necessary, events of Gethsemane and Calvary, and rejoice in the glory of resurrection morning, we also can remember the merciful and generous visit of the Lord Jesus Christ to the spirits of those who had lived and died on the earth until that time. He declared their redemption from the bonds of death, along with redemption for all who would live and die in time to come, and the opportunity for all who had or would ever live to hear the gospel of Jesus Christ. This can be another remembrance that inspires our gratitude toward and love for the Savior at Easter. 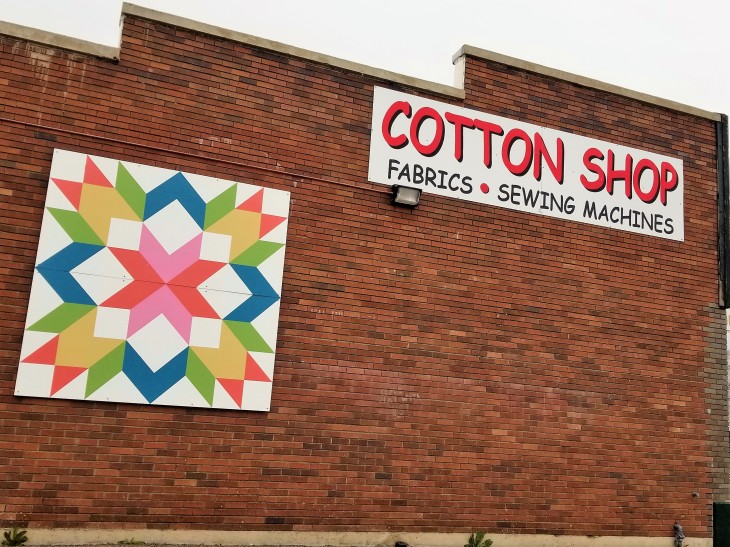 One of my favorite stores, the Cotton Shop, is going out of business because the owners, the Daineses, are retiring. This fabric store, with a zillion bolts of cotton and flannel, batting, and sewing notions beloved of quilters—and people like me, who would like to be quilters, but could more accurately be described as “fabric collectors”—is located at the corner of 500 North and Freedom Boulevard (200 West) in Provo. Their stores in Murray and Sandy are closing, too. This will be a loss to sewers and quilters on the Wasatch Front.

Fabric stores, like libraries and bookstores, are easy to enter and hard to exit. I wander around, looking at the enticing fabrics and designing quilts in my head, and end up carrying bolts of stuff I can’t live without around the store. I look at those fancy quilting machines and wondering if a new sewing machine—mine is a 1971 Kenmore model with some bobbin problems—would convince me to sew some of the projects I have stacked in piles around the sewing room. Then I look up from my collection of fabric bolts; two hours have gone by and I have to decide whether or what to buy, trying to multiply prices-per-yard and calculating in my head how many yards I should get. (Six yards of everything seems like a safe bet, since I don’t know what I’ll need it for.) I usually end up buying two or three yards of whatever I can’t live without, am shocked by the total price—I’m still thinking 1970s fabric prices—take it home and wash, iron, and starch it, and fold the pieces into the neat piles on the sewing room shelves to join their buddies in quilting fantasy land.

My quilting fantasy land is mostly a result of the Elm Creek Quilts series by Jennifer Chiaverini and the Cobble Court Quilts series by Marie Bostwick—yep, I’m really good at reading about quilting and not so great at doing it. 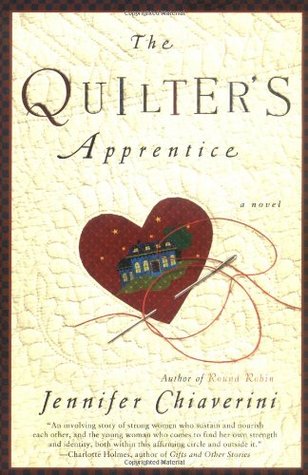 I’ve made one quilt, from a kit called “Glaciers of the Inside Passage,” designed by Lisa Moore and purchased at the Rushin’ Tailor’s QuiltAlaska shop in Skagway. We were walking around town when our cruise ship was docked there some years ago; we went into the quilt shop and a completed version of the kit was hanging on the wall. After our ship had sailed off to the next port, I grieved that I hadn’t bought the kit. Alan, who (unlike me) lives in the twenty-first century, suggested that they might have a website, and he was (as usual) right. The lines aren’t exactly straight, but the quilt is hanging above our bed and looks great to me. 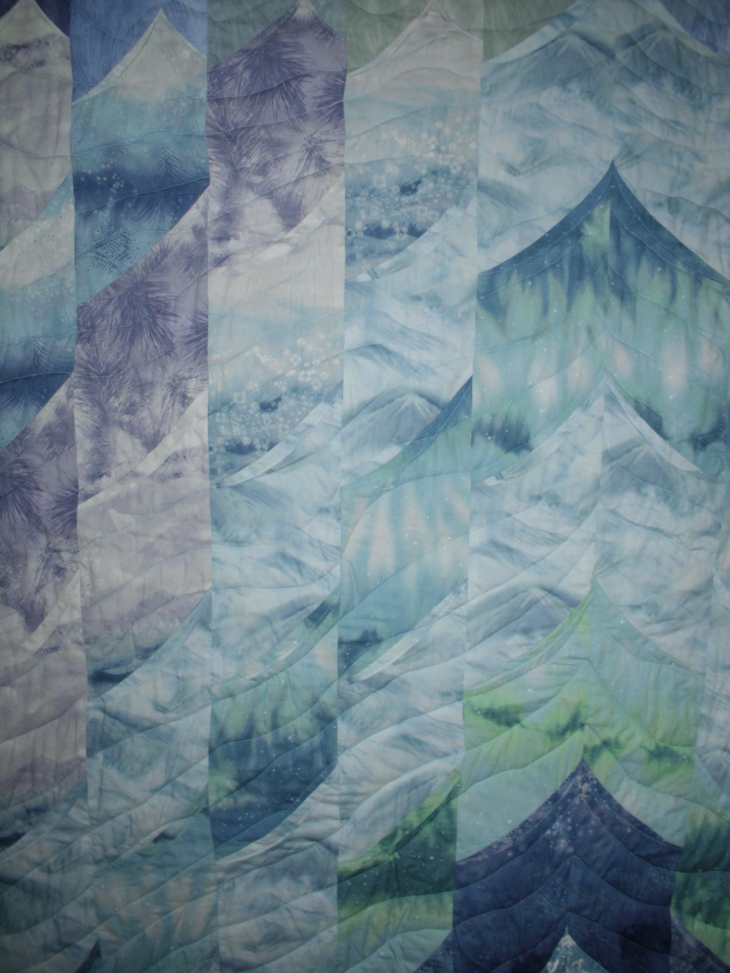 I will sorely miss the Cotton Shop’s contributions to my quilting fantasies—going out to Orem to the big chain fabric store just won’t be the same. Thanks and farewell, Cotton Shop.